Since 1992, Jardins Aquadesign has created over 280 water gardens.
Among them, many stood out from the pack by their outstanding beauty, originality or the impact on our professionnal evolution. Picking up only 25 was a hard task!

Here they are in chronological order, starting with our very first pond back in 1992 (please note that the projects from the last two years have been left out for now to let them time to mature)… 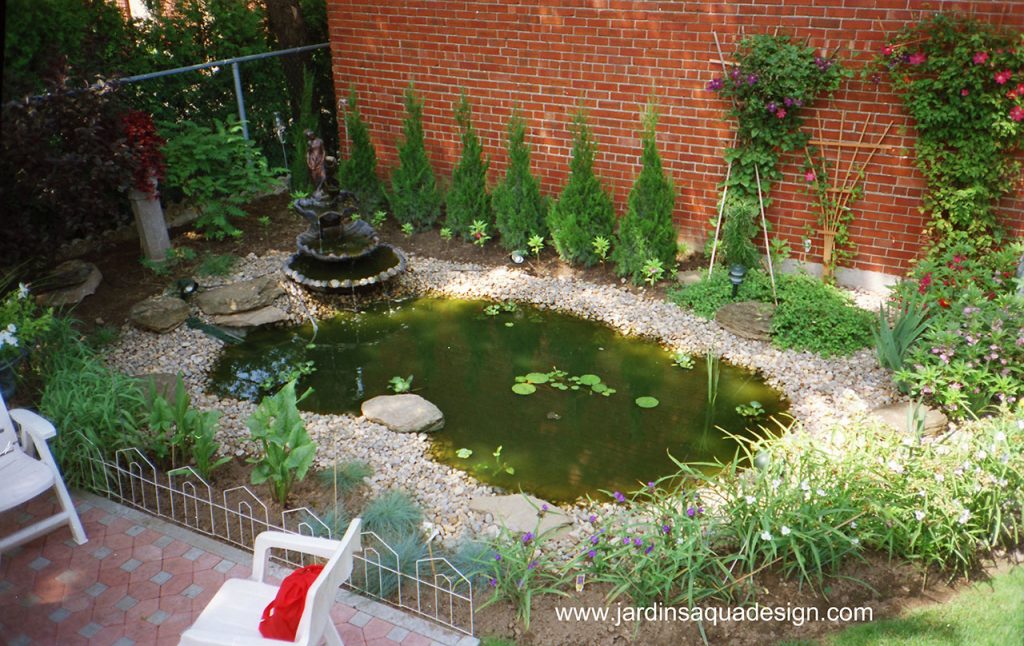 1992 – Ahuntsic, Montreal, the start of a beautiful story! 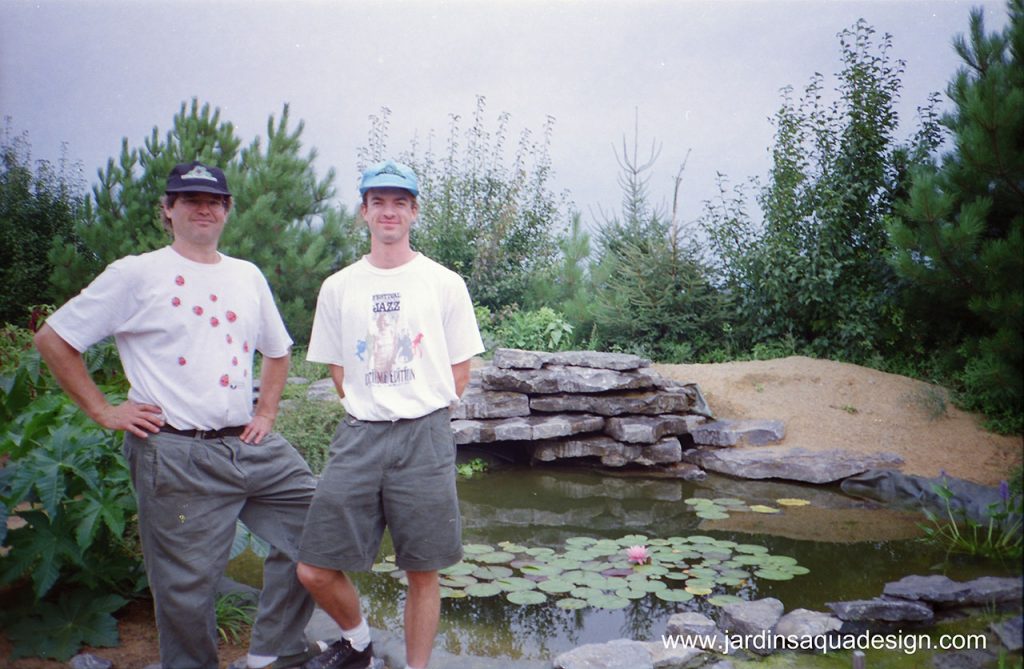 1993 – At the Jardins du Grand Portage with Yves Gagnon. The pump was powered with a small solar panel. 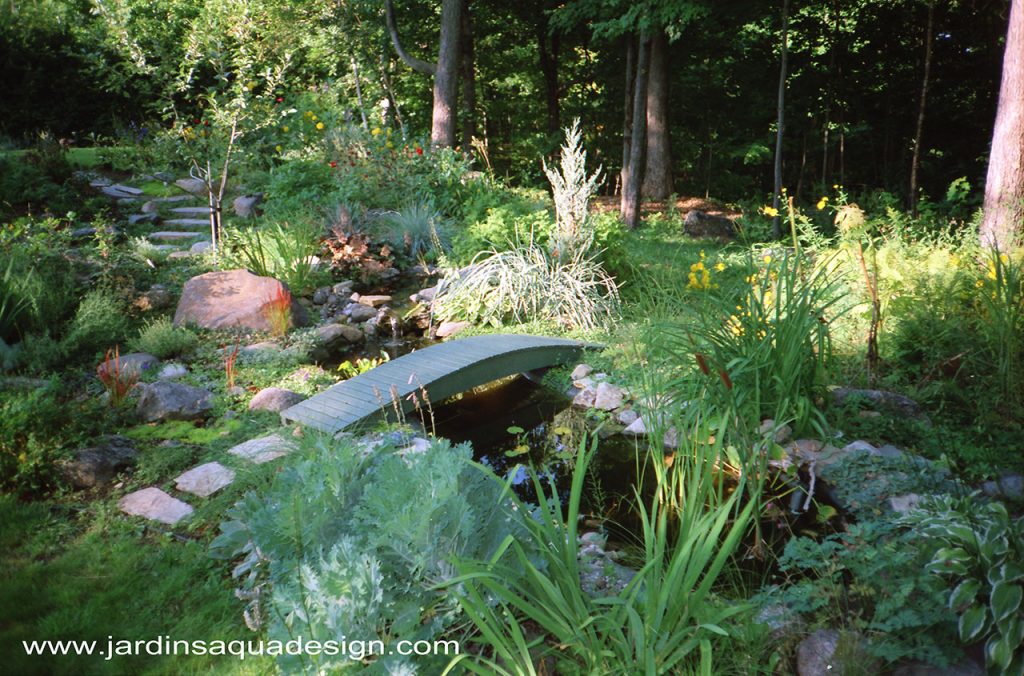 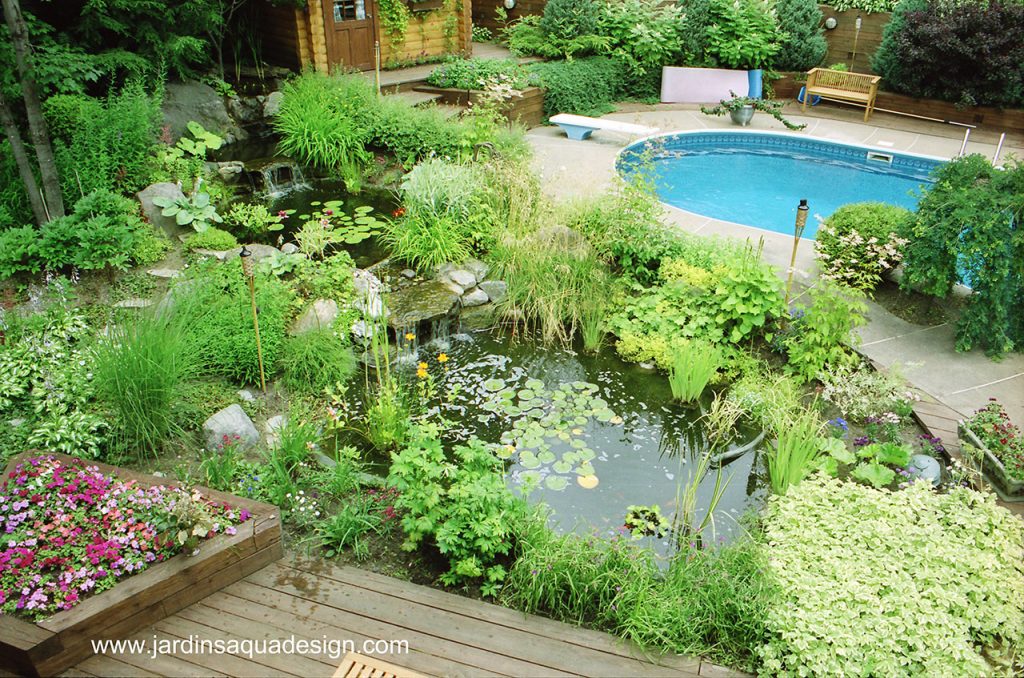 1998 – After a few years of hand digging ponds in the Laurentian rocky soil we realized we needed help from machinery… so here’s the first pond we dug with an excavator in Sainte-Adèle! 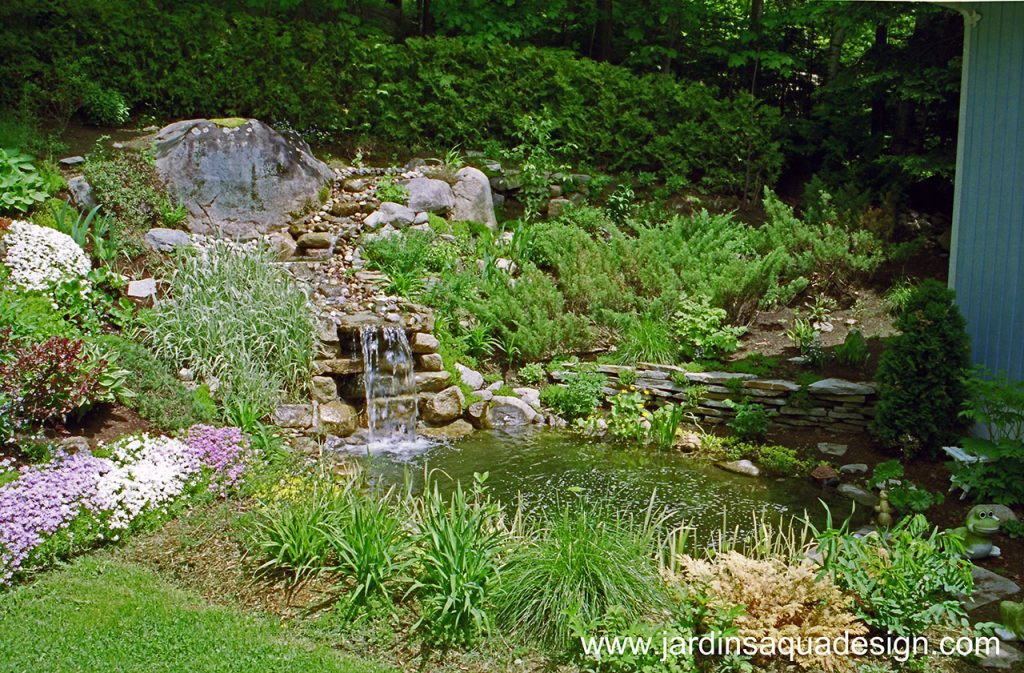 1999 – First pond with a skimmer and first 3’ high waterfall! Love those mountain hills! 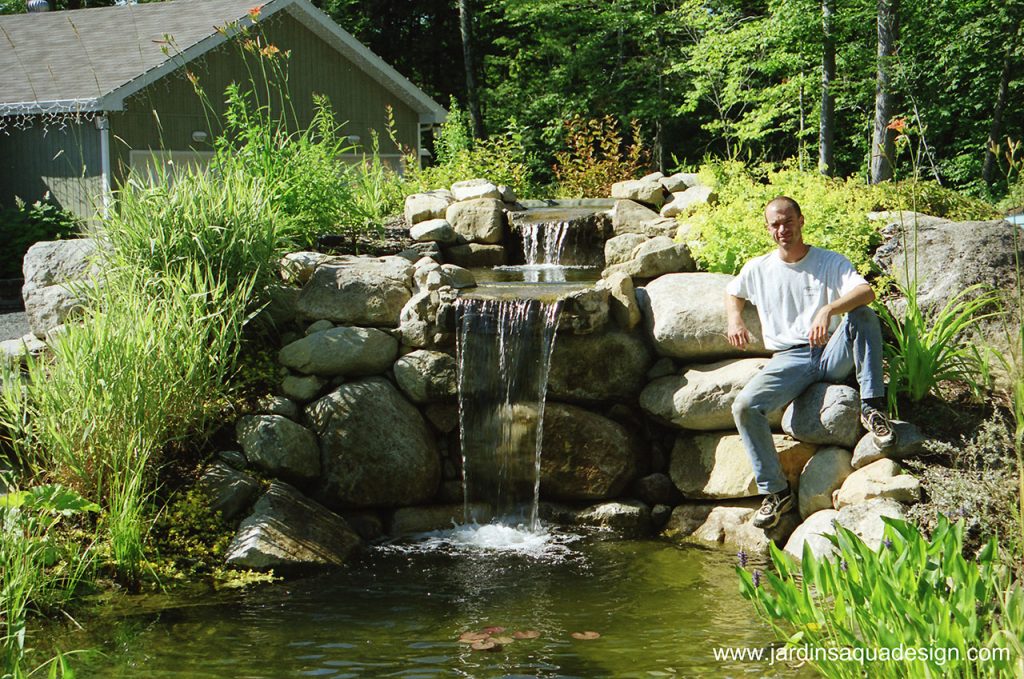 2000 – This picture was taken by a journalist of ‘’Le Journal de Montréal’’, it was my first appearance in a big daily newspaper. Showing off this great 4’ high waterfall in Morin-Heights! 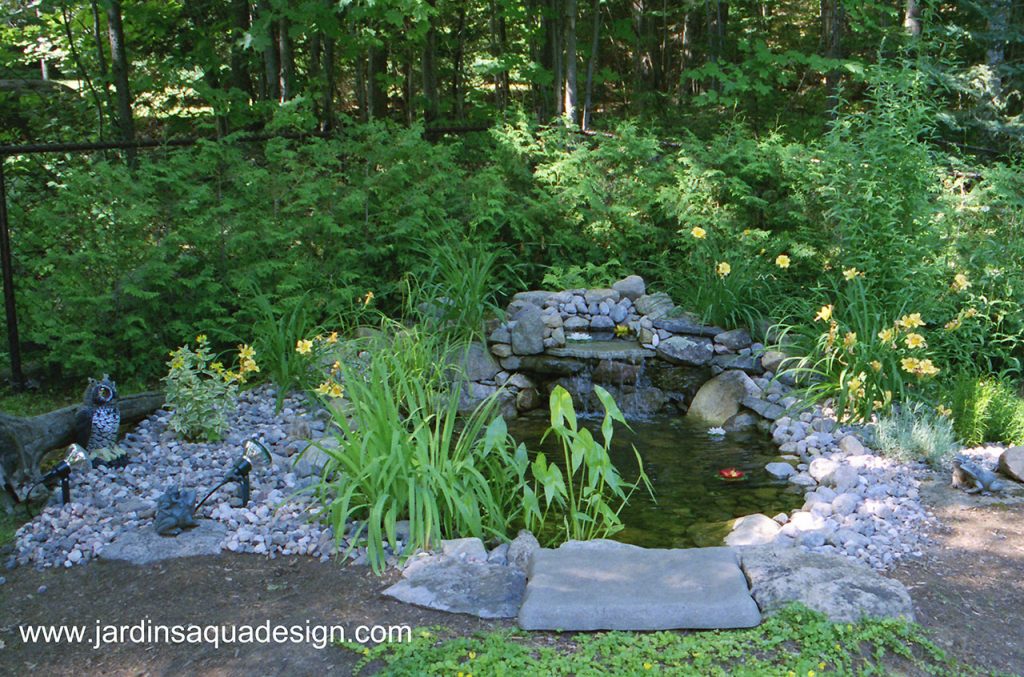 2001 – The start of a new era in pond building for us : the very first installation of the complete Aquascape Ecosystem! 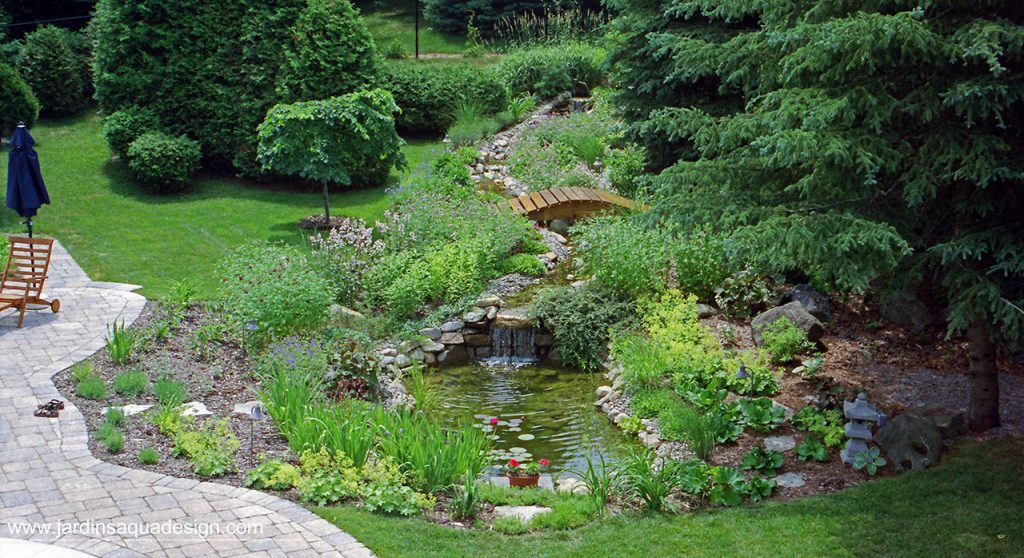 2001 – This water garden made the front cover of the book ‘’ Aménager un jardin d’eau, techniques et conseils ’’. It features a 50’ long stream, located in Morin-Heights. 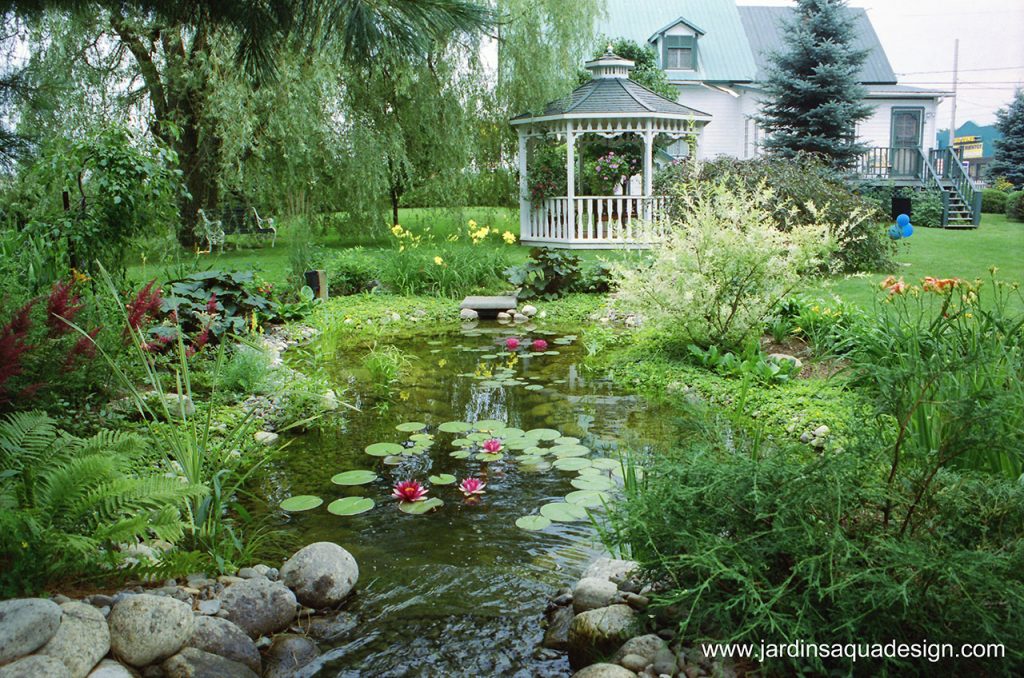 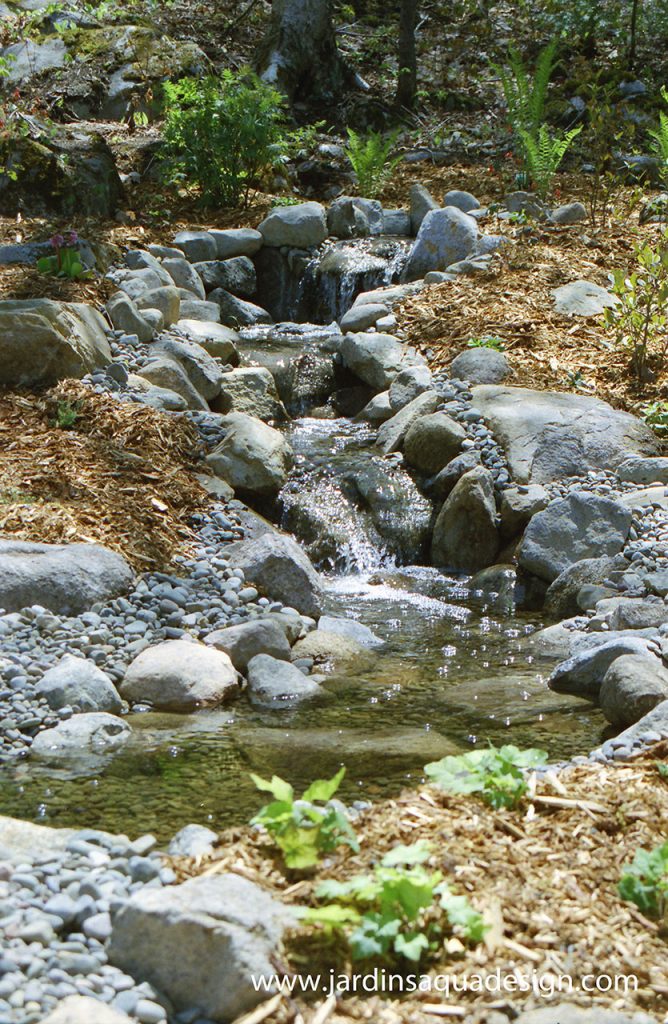 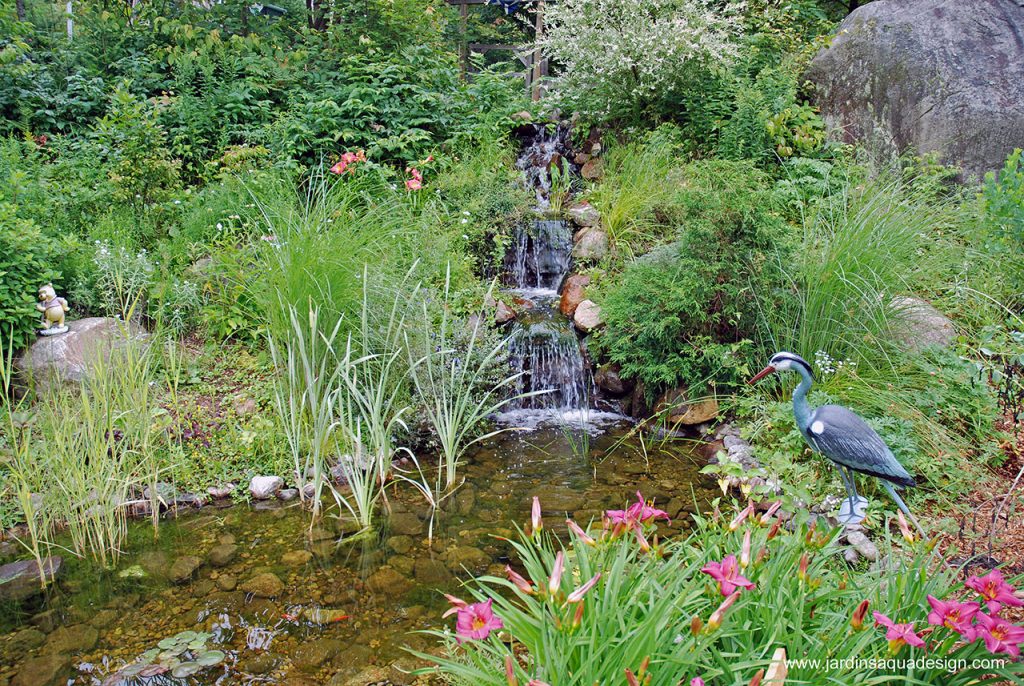 2003 – Farmhouse water garden cherish by the owner’s kids and… ducks! A popular place when we were doing our ‘’Parade of ponds’’ tours. 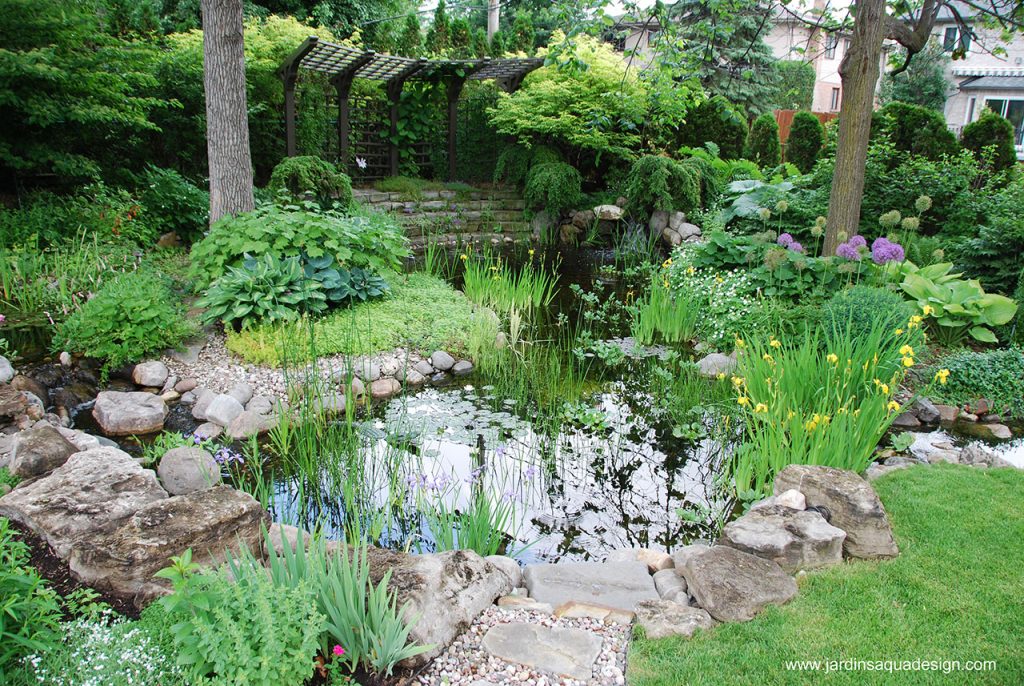 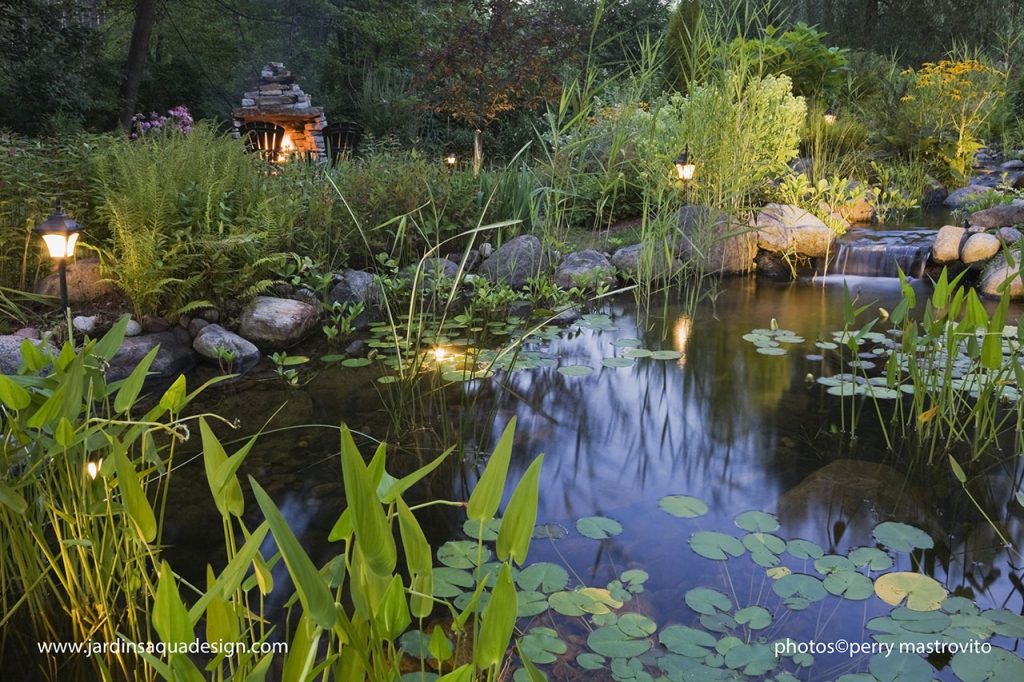 2004 – This water garden built in 2004 is featured in the book ‘’Private gardens of Québec’’ and marks the beginning of a fruitful collaboration with photograph Perry Mastrovito. It also appeared in the Canadian Gardening magazine. 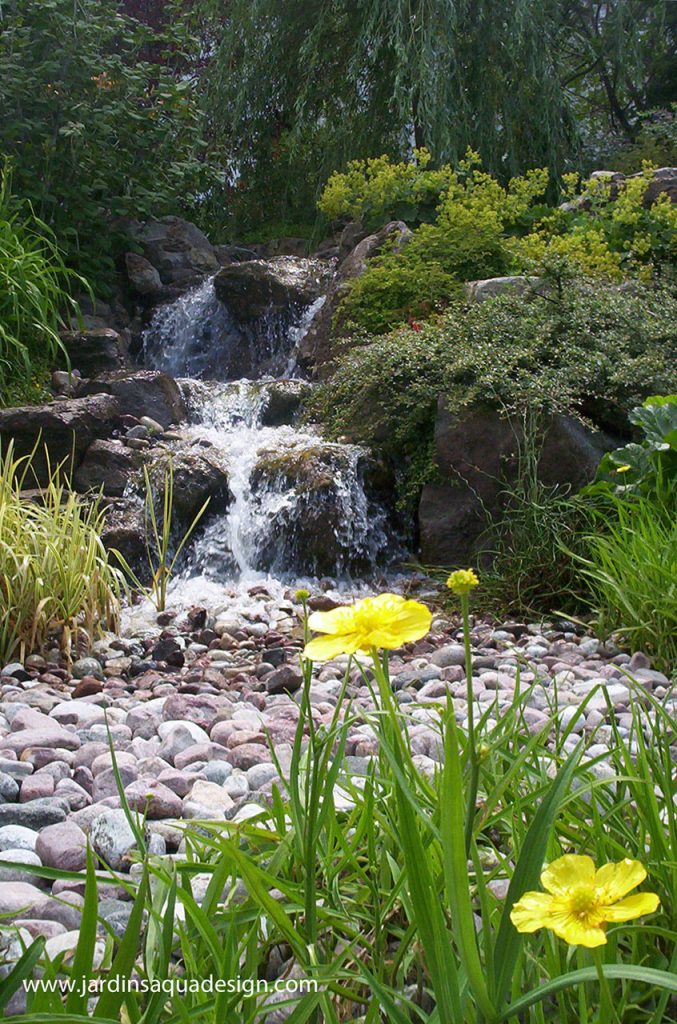 2006 – First Pondless Waterfall ever built in Québec at the International Flora of Montreal. 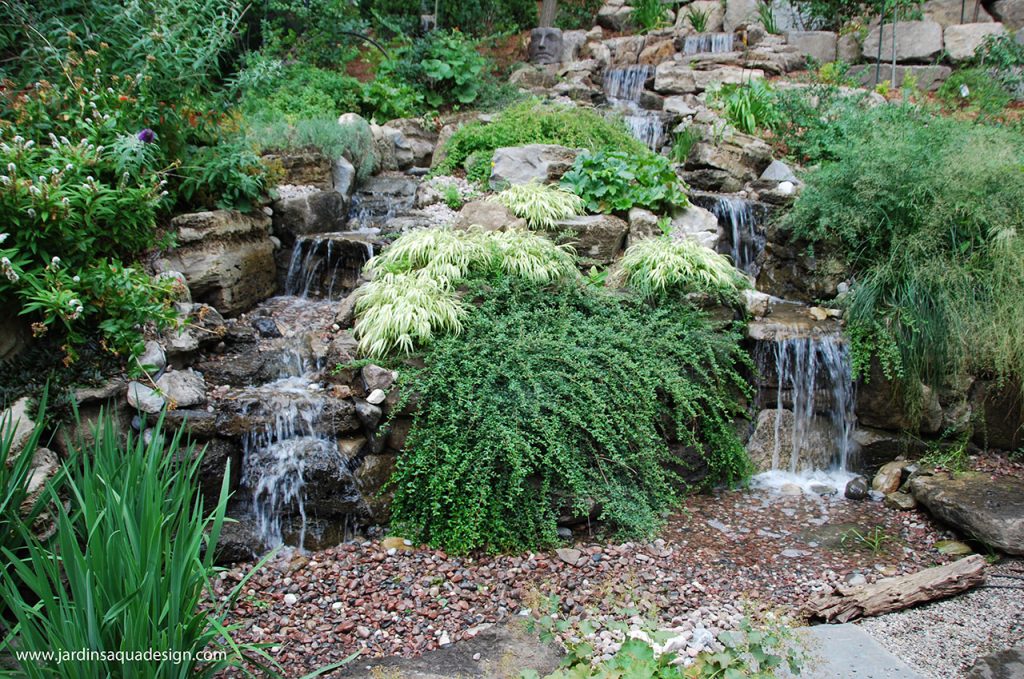 2007 – Located in Côtes-des-Neiges at the base of the Mont-Royal, we baptised this pondless waterfall ‘’the great Y’’. 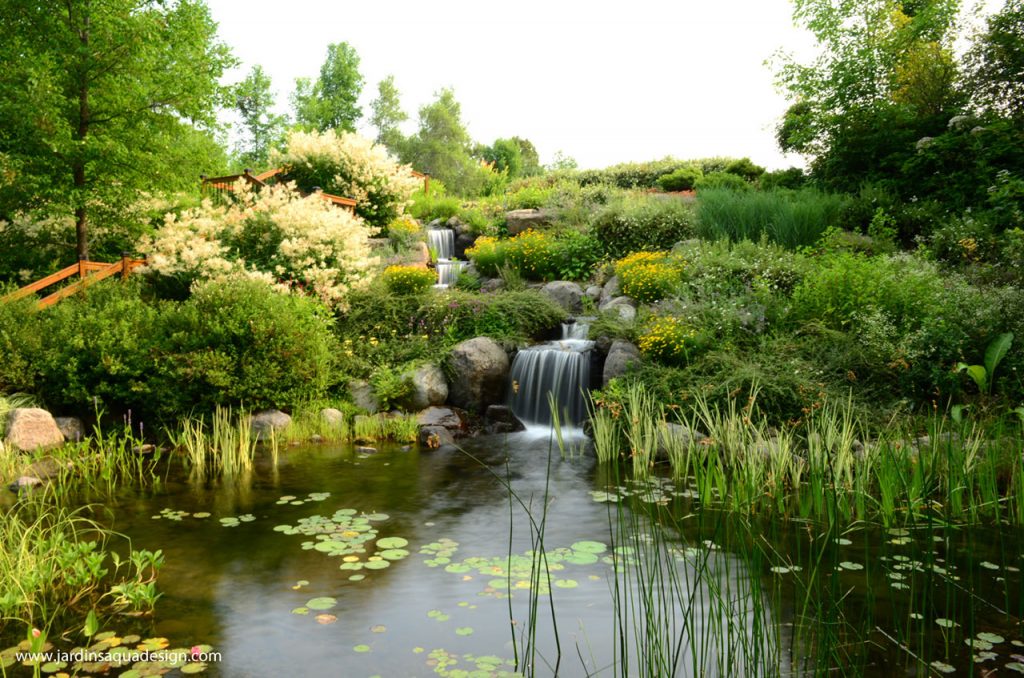 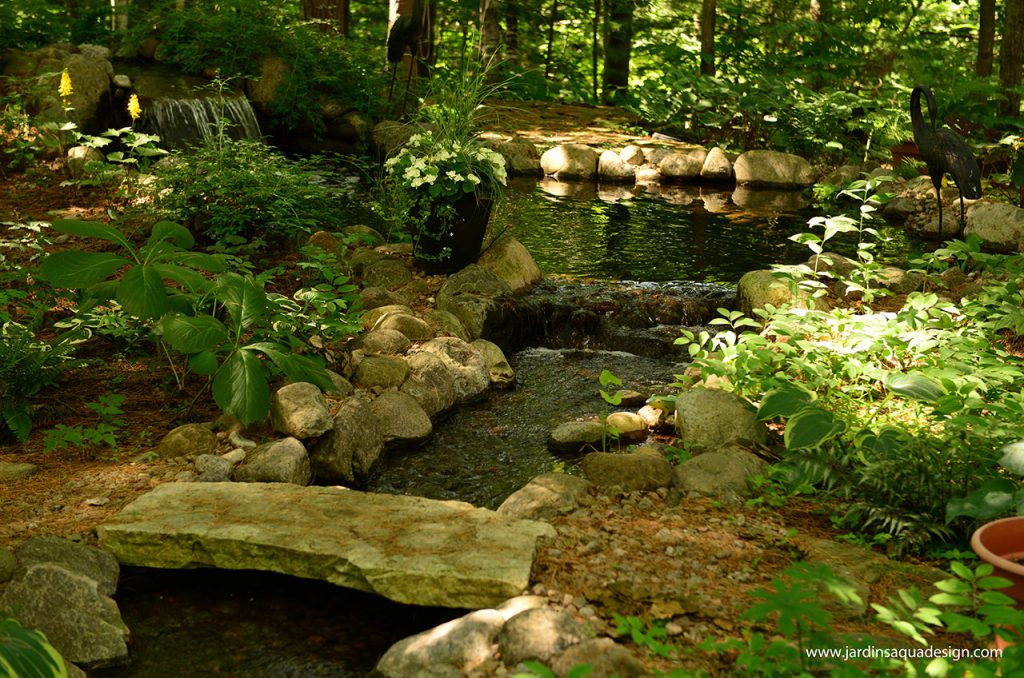 2009 –Shade garden under tall pines in Terrebonne (consist of 2 ponds, 3 waterfalls, a wetland filter and a 30’ long stream all interconnected). 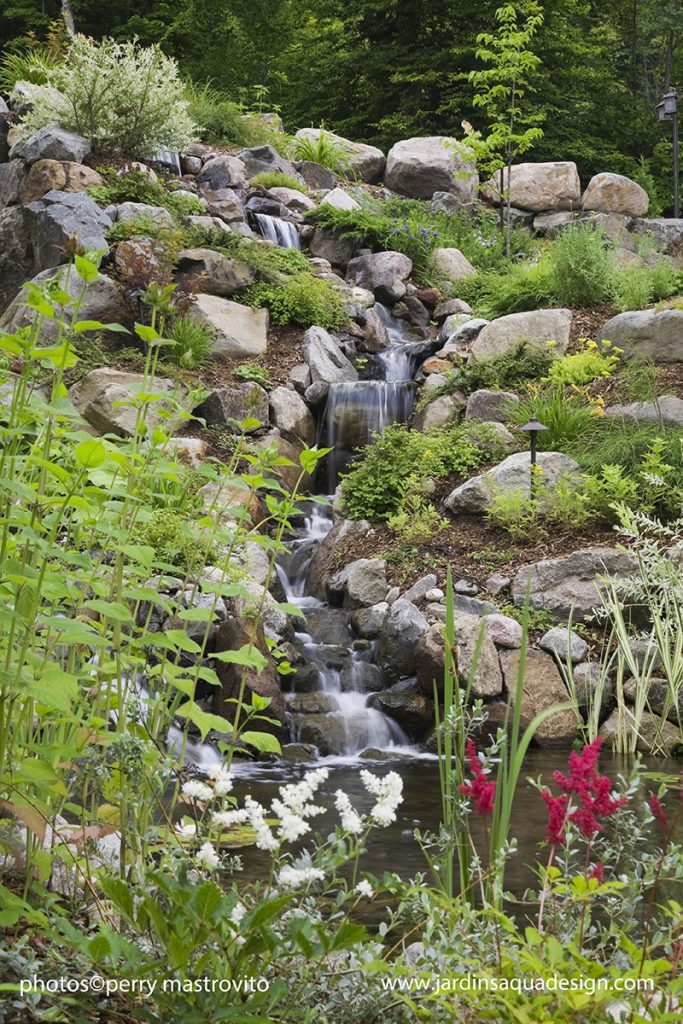 2009 – Our first swimming pond and our tallest waterfall ever : 30’ of drop! Mountainside in Saint-Sauveur. 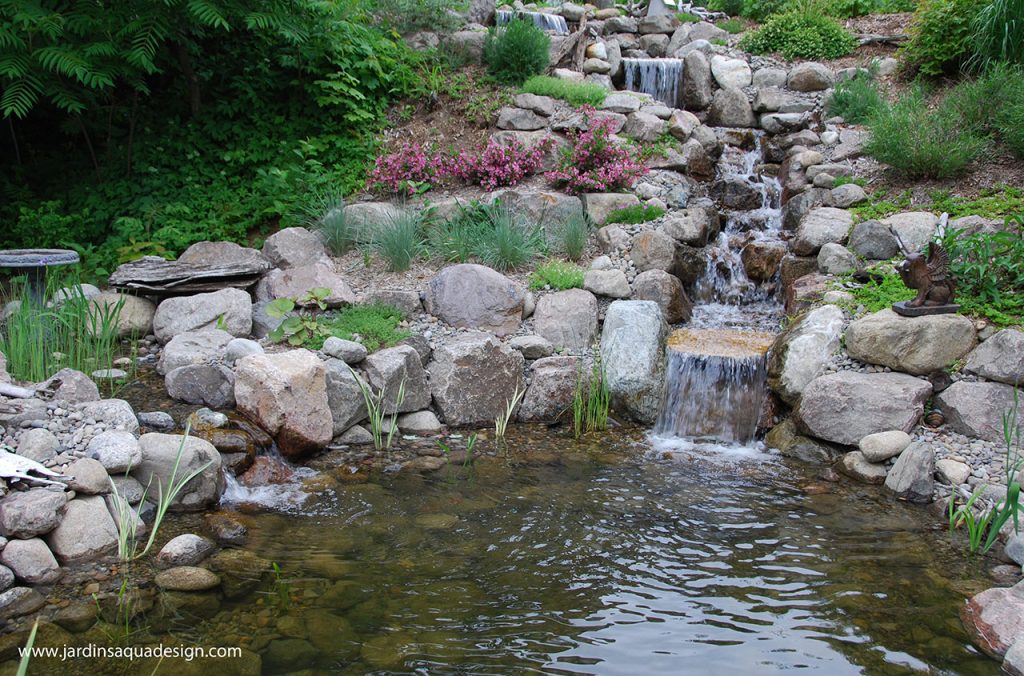 2011 – Tucked in the back of this house in Saint-Jérôme this well hidden small swimming pond is the perfect place to cool off privately during those hot summer days! 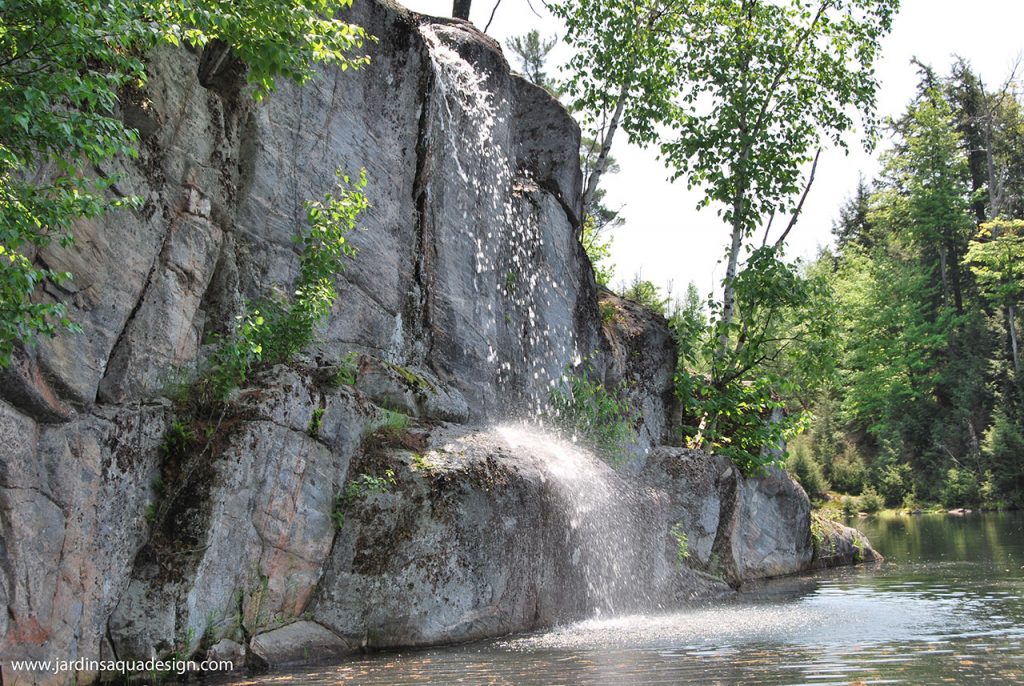 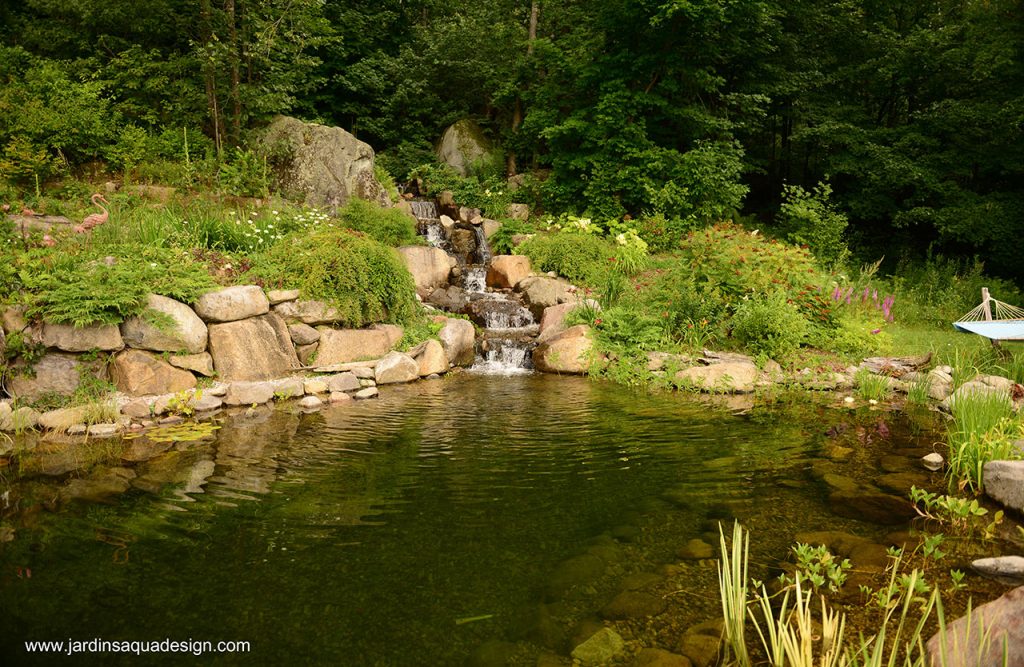 2011 – Located in Morin-Heights, this is our biggest lined pond so far : 30’ X 50’. Affectionately baptised the Olympic pool! Of course, it’s a swimming pond. 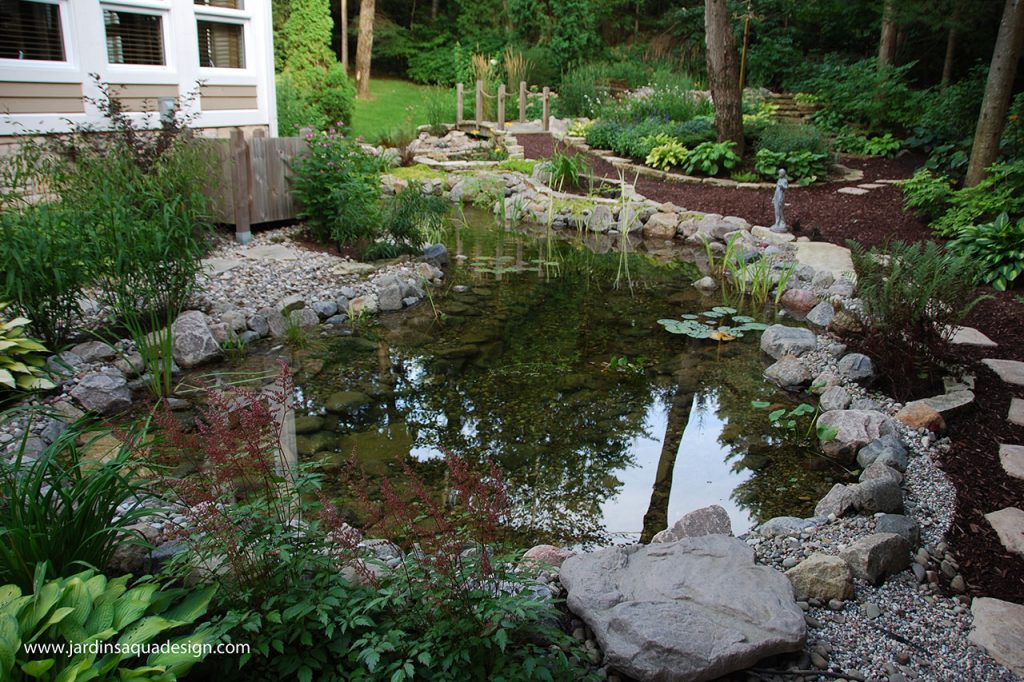 2012 – Long pond with a shape that hugs this beautiful house in Piedmont. The Gazette » 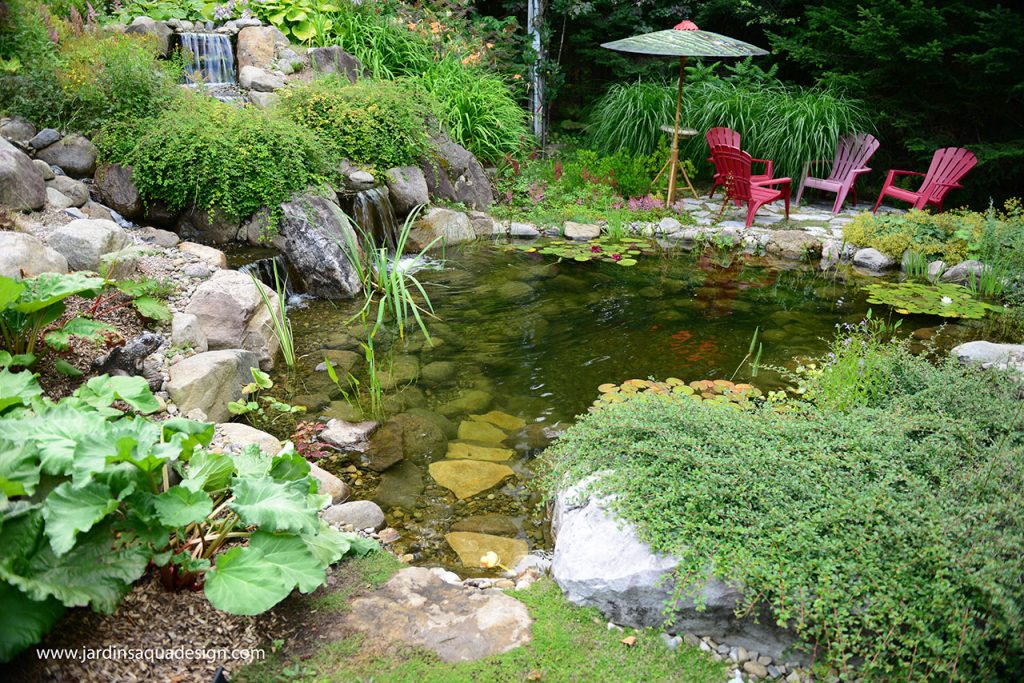 2012 – First swimming pond with a negative edge instead of a skimmer. 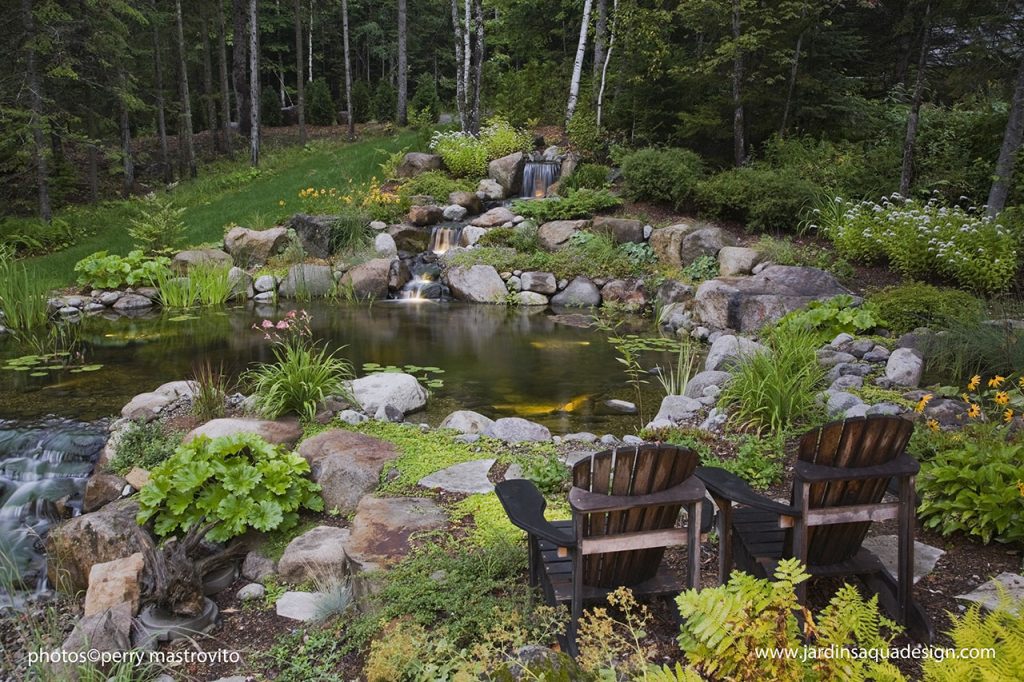 2012 – To mark the 20th anniversary of Jardins Aquadesign we (finally) built ourselves a Signature water garden here in Val-Morin. Consist of the main swimming pond of 25’ X 30’, 3 waterfalls, a wetland filter, a negative edge and a rainwater harvesting system. Since then, people have stop telling me ‘’poorly shod shoemaker’’! Video about this project » 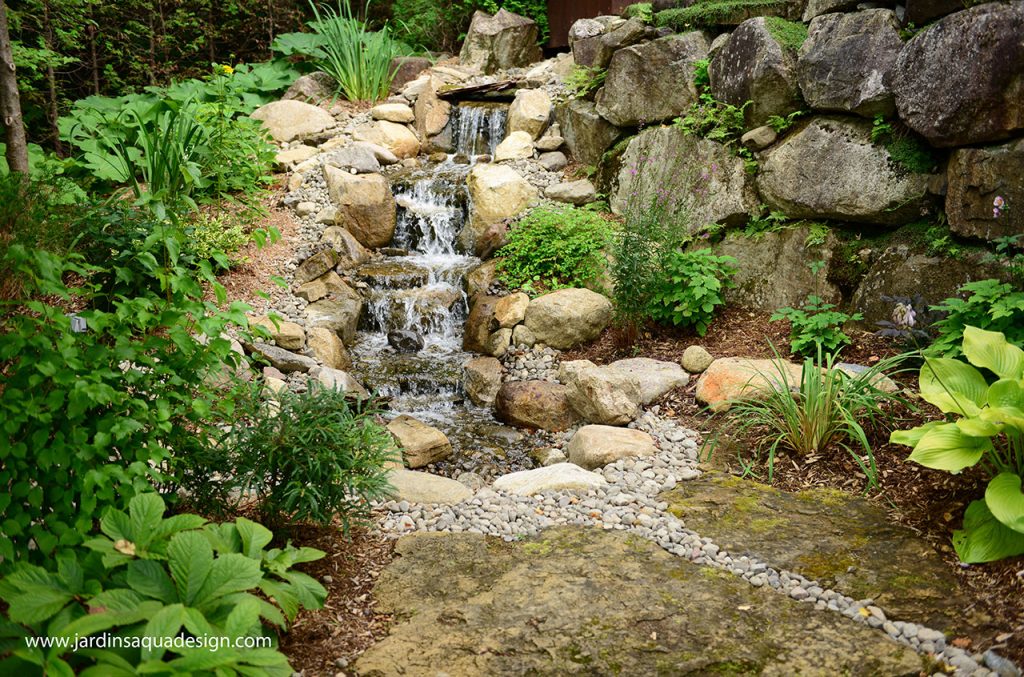